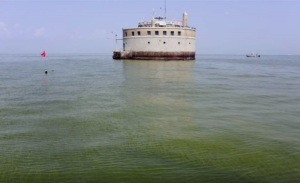 Harmful algal blooms (HABs) are defined as episodes during which large quantities of algae feed on nutrients present in the water, namely nitrogen and phosphorus. Lake Erie was declared dead in the 1960s due to nutrient loading and the resulting algal blooms. Significant phosphorus reduction efforts in the 1970s and 1980s, including addressing wastewater treatment plant discharges, completing conservation tillage practices, and banning phosphorus in laundry detergents, allowed the lake to recover.

Unfortunately, dissolved phosphorus has been steadily increasing since 1995. There are many sources of this phosphorus: agricultural runoff, manure runoff generated from livestock operations, dishwasher detergents, wastewater discharges, zebra mussel excretions, existing sediments, failing septic systems, lawn fertilizers, and more. There are other factors in this equation, such as increased frequency of severe storms, increasing temperatures, and heated water discharges from power plants. 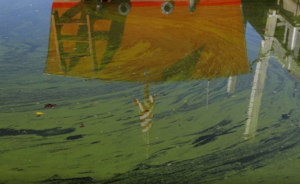 There are good algae, and there are bad algae. Algae are a very diverse group of single and multi-cellular organisms that include groups such as green algae, cyanobacteria, and diatoms. Algae are an essential component of a healthy ecosystem. However, in excess or in certain forms, they can present many problems.

Harmful algal blooms (HABs) are defined as episodes during which large quantities of harmful forms of algae appear in the lake. HABs are caused by several species of cyanobacteria, also known as blue-green algae. Most of the time, small numbers of these cells are present, but under conditions of warm water temperatures and high levels of nutrients, the propagules resting on lake or river bottoms will bloom. While blooms of anabaena and aphanizomenon occur in Lake Erie, most of the blooms since the 1990s have primarily been the blue-green algae microcystis aeruginosa. Microcystis can sometimes produce a toxin called microcystin, which has been implicated in animal illnesses and death as well as human illnesses, and rarely human death. There are no sure visual ways to determine toxic from nontoxic algae.

Large algal blooms can significantly deplete oxygen in water and can kill off aquatic life. This death by oxygen-deprivation is known as anoxia. The aquatic life in Lake Erie perished by anoxia before, and the lake was declared dead. The way things are going, it could happen again. 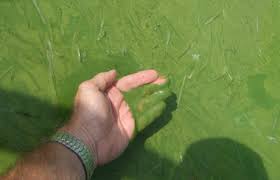 Lake Erie had the largest harmful algae bloom in recorded history in 2015. The 2015 was more in the open waters in contrast to the previous 2011 record bloom that extended from Toledo to beyond Cleveland and along the Ontario shore. The bloom often extended over ten miles from the shores and in the central basin was observed at a depth of 60 feet. The density of the algae slowed boat motors down. 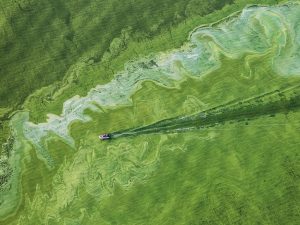